the French Open include:

In Li Xue Rui's case it is because

of  illness contracted during the Denmark

of taking a break after the hectic domestic schedule

and probably preparing for the China and HK circuit.

On the positive side, their absence only provides an

opportunity for other players to shine and win more prize money.

Surprisingly Wang Shi Xian was not withdrawn.Sun Yu has been

be more than coincidence.Otherwise the itchy bitchy fan boys and

there is a walkover in protest to this probable set-up.If this continues

Sun will never be able to move up the rankings.

If this is deliberate match fixing by organisers, then probably this

Humbugland 's Open may be in future be downgraded to GP status.
Posted by mynahbird at 7:08 PM No comments:

We can only hope that this velodrome is

in 2013, otherwise we wont get very high

just for the sake of some marketing hype.
Posted by mynahbird at 6:53 PM No comments:

Hoyer Larsen on Gamesmanship in badminton and Hawkeye System

At least Hoyer Larsen who is a legend

who has gone against the odds himself knows what

competitive badminton is all about.

the audience there are and the importance they put on

building a positive image of their society for their continued

This is in contrast to the thick skinned obnoxious fan boys

only moan and whine and focus on sabotaging the competition

instead instead of doing positive things like investing their limited

tax money to develop own human capital and image building instead

Losers moan on and on like a broken record about unfair

competition,typical of people with a backward culture ,whilst

winners face up to adversity and take positive steps to overcome

own backyards first.Equally ironic are losers who dont know who

their real friends are but continue to praise their enemies and

Boleh? It's the regional culture and mentality,stupid.

Posted by mynahbird at 7:47 PM No comments:


Badminton racquets have come a long way since

the age of wooden or metal racquets or metal/wood

and stiff and required great strength and long swings

to impart power and were very slow on defence as they

were not very manueuverable because of gravity defying

Modern racquets are now made of slim,lightweight graphite

Design is generally classified into 3 types :

rapid swings up and down,forwards and backwards.

3) Balanced racquets offering something in between.

Within the 3 classifications,design is also differentiated by

1) Stiffness of the shaft, affecting how players swing their
racquets,stronger ones with strong wrists preferring stiff shafts
and short swings, weaker ones preferring flexible shafts for a
"whiplash" or flyswatter effect to add power preferring longer
swings and use of more bodyweight.

2) Frame design-Frame design can also be stiff or flexible,and the
shape and weight of the frame will affect the aerodynamics of the
racquet.Ultimately the frame type influences heavily the degree of
control of the shuttle and stroke and also the racquet's
maneuverability and speed.

So,to me, when selecting a racquet, it is not just about whether it is
head heavy or head light or balanced, within these 3 classifications
there is also the sub-classification of shaft rigidity and frame design
which influences the hitting technique of the player.

Some other factors which may affect how the racquet responds are
its total weight,size of grip and the string tension.A smaller grip on a
stiff racquet for example may permit more manueverability.

Ultimately racquets are differentiated according to their degree of
power,control ,speed and maneuverability . It must be impossible
for a racquet to have all three and you gain some and lose some.
It is ridiculous to have a player very powerful but slow in defence
or unable to control his strokes.Even worse still is the player with
an ideal racquet but physically weak or with sluggish movement and
footwork.

Choosing a wrong racquet unsuited to a player's body type,technique
or condition may cause unnecessary fatigue or inefficiency .

Professional players are generally physically honed to play with any
type of racquet but preferences on racquet types may vary across
different genders and age groups.

Posted by mynahbird at 11:22 PM No comments:

Koo Kean Keat and Tan Boon Heong given another ultimatum.


Picked up one from a warehouse sale after

wondering what the fuss was all about.

This model was released around 2006

as one of the pioneer Yonex lightweight

and headlight series and a quick check of

the 2007 All England revealed that half the China

That explains why the people who snapped up the

racquet at the sales were mainly uncles and veterans.

when coached by Li Mao,but switched to a harder

Mao had noticed LCW's deficiency in that area.

The racquet was probably withdrawn when Yonex

collaborated with Li Ning to produce a new line of

racquets for the China team.

I have recently settled with using the Nanoray

700 RP as my standard because it is light,fast

especially in defence and manoeuvred easily,but it

lacks slightly in power and control. The Nanospeed

9000x could have been designed to overcome this

problem in power and control of the Nanospeed 7000

which preceded the Nanoray 700.

It is essentially a headlight racquet with a very stiff shaft

but has a light,resilient,slim and flexible frame, reinforced

at certain points like the old Titanium racquets to afford

stability and control.The design of the frame allows the

racquet to be speedy, manoeuvrable but  gives it a bit more

in terms of power and control.So it gives defensive and

speedy players an extra bite in smashing ,dropping and

the additional power from the "elastic" titanium laced frame.

Never tried the Nanoray 9900 but it must have been an

I believe the current Nanoray z Slash is actually following

this process of upgrading it from the Nanoray 700 RP or

and this in turn an upgrade of the Nanospeed 7000 .

the following are my conclusions (just my opinion

and how it suits my defensive, countering ,driving,

series pales in comparison with the Nanoray series,even the low

Maximum power can be achieved with many head heavy racquets

and maximum control with stiff frame Arc Saber models ,at the

expense of other advantages of course.

Manoeuvrability is a matter of whether the racquet

is flexible enough to be twisted to execute quick,deceptive

strokes using the wrist and whether the racquet is light enough

to be wielded up and down rapidly between attack and defence

without tiring out the player and still stable enough to generate

Control is a matter of accuracy ,the stiffer and more stable the

frame, the better quality the shots especially at the net and placements.

Speed and power are dependent on aerodynamics, built

Swinging a racquet downwards is aided by gravity, dragging it upwards

is resisted by gravity.

All three racquets are essentially built for doubles play

although many are using it in singles.

The biggest drawback of the Nanospeed 9000x to me is its

poor recovery and braking effect.This means that after a big swing

position to repeat the swing or even to perform a block, unlike

Arc Saber series.That must be the reason why this model was consigned

to the graveyard of badminton racquets,although it may suit singles play.

Or, the Elastic Titanium technology was simply shifted from the Nano

series to the Amortec. By 2008 most players except Xie Xin Fang had

adopted the Amortec series.Another glaring weakness of the 9000x is

behind the back.That is why the 'S' version with a flexible shaft was more

popular than the' X'.

were the few who adopted it and it definitely suited their softer,

ie.light, fast,manueverable,but with a stiff shaft and strong light frame

for smashing and clearing.A long backswing is not required,the stiff

wrist and elbow work is required.In this unique design the frame is

the part that provides the punch instead of the stiff shaft,which hardly

On another note,Li Ning racquets used to be built around powerful

head heavy racquets but the 3rd generation series are designed to

be softer either to accomodate "weaker" amateurs or enabling

China players to focus more on softer play expounded by

racquet speed and deception. In fact,personally I find the

Nanospeed 9000x plays like a lightweight and headlight Li

Ning N90II, but  faster,more flexible and a little less powerful,

Even girls like Porntip and Busanan can use the N90 II now.

after having tried out the model.Never depend on manufacturer's

marketing tricks or advice from other players.Change models if

the current racquet used cannot cover the weaknesses of the

player.I must have at least 10 Li Ning and Yonex racquets in

my bag,and they all play very well. I only change them to suit

the speed of shuttles used or to counter glaring weaknesses of

To me,playing doubles is like Volleyball, the ultimate goal is to

at the net,or like football,hockey or basketball, it is about

teamwork and collaboration to set up the striker to score the

goals,doubles is not about killing the shuttles with a power smash

from the baseline, its simply too easy to defend nowadays. 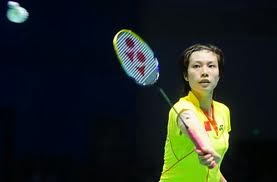 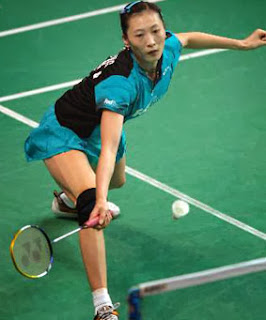 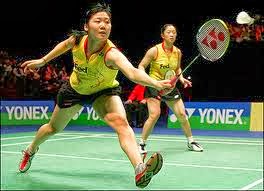 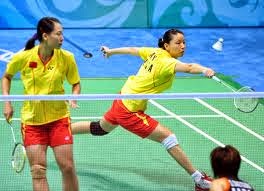 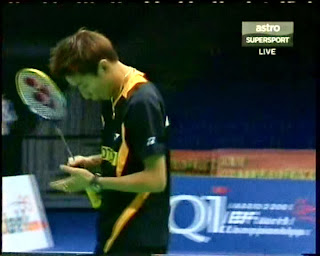 Malaysia and Korea to have joint training programs in badminton

That part about Korea emphasising on

Perhaps Korea will achieve what Ng

That is ,slowly but surely educating the

to match up to the realities of the modern

world of Technology and Science.
Posted by mynahbird at 7:05 AM No comments:

Business as usual in BAM

Tax breaks and incentives for Malaysian companies to sponsor sports