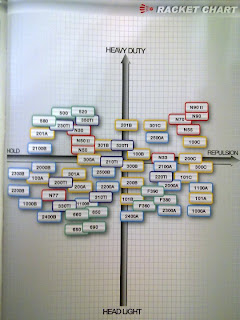 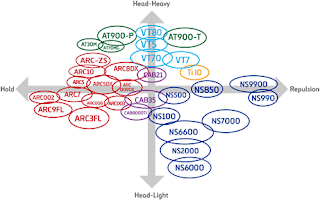 The best place to shop for badminton racquets in recent times is the area
around Pertama Complex in Jalan Tuanku Abdul Rahman.To get there
hop on the Kelana Jaya LRT line and disembark at Masjid Jamek.Then
walk along the main road of Tuanku Abdul Rahman past the Colliseum
restaurant where you may want to stop for a steak or draught, then pass
by GS Gill which sells mostly soccer gear.
Pertama Complex is the complex next to the Sogo department store.
Have not been there for years and the racquet shops have somewhat
consolidated, of the dozens of sports outlets only four specialise in
badminton racquets and gear each with their own niche.
The most well known is Racquet World famous for selling genuine Made
in Japan Yonex racquets.Then there is Topper sports if you are looking for
made in Taiwan Yonex such as the Nanospeed 800 or 990.Nearby is
Etakoh which has been there for 30 years. Etakoh operates a Li Ning
franchise shop next to its shop and here you can get all the genuine Li Ning
stuff. Have not tried the N series but the ultra Carbon series are not too
bad,bought a Li Ning 3G TI POWERTECH TP100c for Rm 350 a head
heavy high repulsion racquet and found it real value, plays very much like
the Amortec 700. Li Ning racquets of this price range are very powerful
but to me the technology is not as sophisticated,refined or solid and shock
absorbent/proof as those from say Yonex.No doubt though that the high
end Li Ning and Kason racquets are able to match those produced by
Yonex.Li Ning racquets seem to emphasise on sheer power and do not
offer much in terms of versatility or all round play as compared to Yonex
makes in the mid and low price range.In this regard Yonex has a distinct
advantage in being able to cater not only for the top pros but also a wide
band of intermediate players with the fairly good affordable racquets
made in Taiwan and China.
The racquet stringers in Racquet world and Etakoh are top notch.
One floor down at the back of the complex is a shop specialising in low
end racquets with Yonex made in China.
So if you are shopping for racquets in KL and want to do some comparison
shopping around a cluster of racquet shops selling genuine products, this
should be the best place to go.No regrets.
Posted by mynahbird at 2:13 AM No comments: